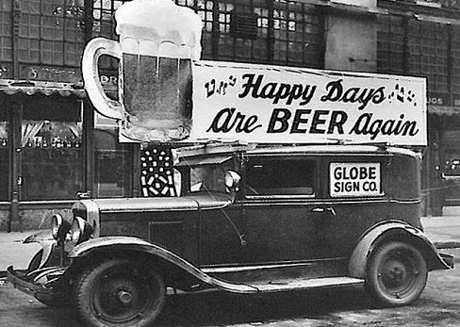 Today is the equivalent of Christmas for beer drinkers – it even comes with an official eve – as brew aficionados celebrate our own holiday on April 7. Join us in a toast to National Beer Day.

This date is about the right to drink – always responsibly, of course – and it has historical significance with regards to Prohibition, President Franklin D. Roosevelt and the Volstead Act. It is not to be confused with Repeal Day, which is Dec. 5, 1933. That marks the date Utah, the final state needed for a three-quarters majority, ratified the 21st Amendment. That officially rendered null and void the 18th Amendment, which had outlawed the production, transport and sale of alcohol. The separate Volstead Act had outlined how to enforce the 18th Amendment, which had taken effect Jan. 17, 1920.

Stay with us for a little more history and then we’ll get to the good stuff – the beer. Prohibition intended to address crime and other issues by removing alcohol, but, instead, the law of unintended consequences took effect. Americans remained thirsty for their beverages, and Prohibition drove alcohol production underground and into the realm of organized crime.

Roosevelt ran for office in 1932 on a platform of, in part, ending 13 years of Prohibition. After taking office in March of 1933, Roosevelt kept his word and signed into law an amendment to the Volstead Act that allowed the manufacture and sales of some types of alcohol, with beer becoming legal on April 7. People lined up outside taverns and breweries on April 6, 1933 – thus it became New Beer’s Eve – and waited for the clock to strike midnight.

Salute those hearty souls who celebrated the first National Beer Day on April 7 with the perfect beverage choice of Batch 19. This beer is brewed by MillerCoors, which was founded in the United States in 1855 and survived Prohibition and the Great Depression with American ingenuity that continues to this day. Batch 19 is a balanced lager inspired by an authentic pre-Prohibition recipe of hops with herbal and black currant notes. This unique brew allows you to slip back to the era of the 1920s.

Another example of American inspiration is the development of craft beers. The Boston Beer Company is America’s leading brewer of handcrafted beers and offers more than 30 award-winning brews via its line of Samuel Adams products from Double Bock to Cherry Wheat.

This same devotion to craft beer is present in our East Tennessee backyard with Depot Street Brewing, located in historic Jonesborough, Tenn., a town founded in 1779. Enjoy a savory German-inspired Loose Caboose Lager or an Express Amber Ale, a classic American taste.

We cheer those who made it clear that Americans have the right to savor beverages responsibly, and we salute the brewers who ensure we have so many delicious choices. Happy National Beer Day!